Join the Kraken Crew in this award winning, rhyming, comic and in parts gruesome tale of adventure on the high seas, as they embark on a danger-ridden quest to steal gold from the dragons that live in Mount Doom.

The Kraken is a ship that is run by a real motley crew of pirates, including an elf-witch who can charm almost all animals, a banshee who can kill with her super-sonic scream, a young man who can summon storms, and on watch, the ship’s parrot.  He may not be the bravest member of the crew, and he can’t tell fish from seagulls, but, well, at the very least he does alert the crew to all kinds of potential danger.

On their way to Mount Doom the crew use their individual strengths to battle sirens, ghost pirates and a mighty sea monster.  When they reach Mount Doom they really have to work together to battle a swarm of dragons.  This is where the captain steps in.  At the helm, the captain tries his best to keep the ship ship-shape and to keep the crew united in their quest.  He is moderately successful in this, but when even a unified crew start to struggle in their battle with a swarm of dragons he is forced to call upon his special friend.

"Kraken Crew is an adorable picture book penned for young readers by author Dan Malster. This charming story takes readers to the highseas as we    join a band of pirates on their way to Mount Doom, where they intend to steal a bounty of gold from some extremely dangerous dragons.

We are introduced to a magical crew with a variety of interesting talents so that we can rest assured these characters are the best pirates for the job. So when everything goes very far from ship-shape as the crew approaches the mountain, a tense adventure to safety and riches commences. Will the crew succeed?

Author Dan Malster creates just the right balance of tension and excitement to keep young readers hooked on this fabulous picture book without ever making the events too frightening or too overwhelming. The illustrations in the work are beautifully vibrant and cartoony, bringing characters to life in a modern animation style that kids of today will instantly click with. I enjoyed the rhyme scheme of the tale, which helps move the plot along at a fast pace and keeps a jolly sing-song attitude in the scarier scenes with the dragons and dangerous waters. The cast of characters was also larger than life, and I loved their introductions, each getting their own moment to shine in the plot. For such a concise picture book, the story packs a lot in and will surely become an adventure that kids want to return to again and again. Overall, Kraken Crew comes highly recommended."   Readers' Favorite 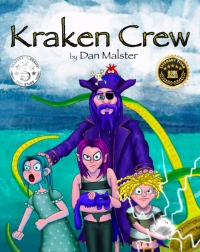